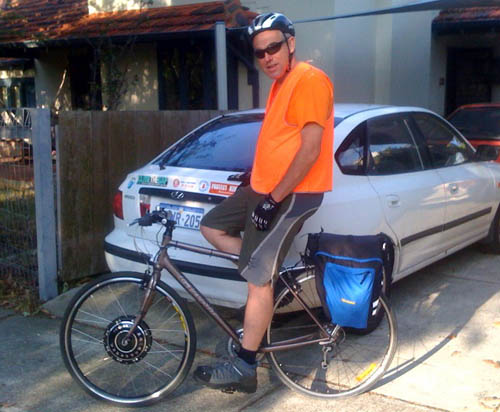 This is the most useful thing I’ve ever bought. I looked around a lot for an electric bike but didn’t want to get a typical Chinese model as I didn’t want a crappy bike and wanted a bit more power due to my weight and size. I found the kit option and have never looked back. I bought a new bike and had a kit put on. All up it cost $645 for a brand new Giant CRX and then $900 for the kit and assembly. I had the 500W motor put on and the bike is very streamlined. I nearly always have the bike in top gear and find that my average speed is nearly 40km/hr, this is riding mainly on flat ground with small inclines. Even though the bike travels a great deal faster than if it was just me pedalling, I feel safer because I ride with the flow of traffic and am able to avoid busy areas by jumping on to the footpath at times and taking the longer route around. In terms of exercise, I get a good workout every morning and night but never feel like it’s a strain. I actually look forward to it as it’s quite exciting compared to a regular bike. I haven’t tested its full range yet but I regularly take it for 25 km rides without noticing any decrease in power. All up I’m very satisfied and am saving over $65 a week in fuel and parking. My one recommendation was to have a battery guage so I could tell how much power I have left but I’ve been told that the best way to determine this is actually by re-charge time. After my 25km ride it takes nearly 4 hours to recharge so I estimate that I’m riding to around 80% of it’s range. Another suggestion is to put a spare fuse in the bag, I blew out a 20Amp one and have replaced it with a 30Amp one with no problems yet. The 10km ride home with no power was do-able but pretty heavy compared to when it’s electric.