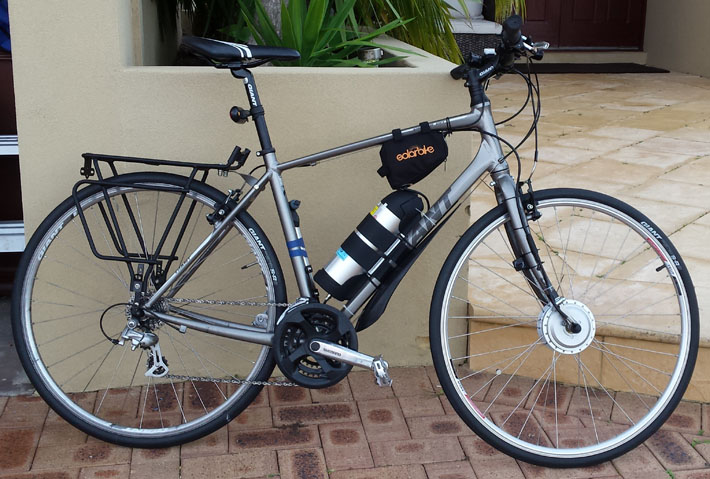 Many thanks to Graeme, one of our customers, for this review. It has some good information on technical aspects of speed, power, weight, performance and general riding styles.

I suppose the first thing to say is that I really like this electric bike. It is definitely still a bicycle – it is not a moped and it’s not a little motorbike. On the road I first rode the bike just as a bicycle with the motor switched off – the bike is a bit heavier than a normal bike, noticeably up hill, but on the flat it felt no different and there is no additional noise or friction because of the motor and kit being fitted . The bike was still smooth with no frame flexing or awkward weight distribution and all feels good. Presumably the tubular battery weight being centralised and the bike’s rigid frame help this.

With the motor in use, the combination of bike and my own power is great fun. Acceleration from a standstill is quite strong and means I never really come off the big chain ring at the front and apart from hills only use the highest 4 gears at the back. Once on the flat and cruising at typically 32 to 35 km/h it can feel like the motor isn’t doing much, but hit a small climb or a headwind and I soon realised that I very rarely dropped below 30km/h and this makes journey averages even with headwinds stay quite high. Overall I still get a good work out but it all happens just that bit quicker and easier. As a final delight – it is great that the whole thing is almost silent when flying along. The only wining I get is from a few of the luddite cyclists that think you are somehow going against the purity of cycling – but what do they know?

There are some good write ups on the net about bicycles and human power that go into more detail on the science etc. I ride a racer bike regularly to work and on weekends and I find that on a typical ride of 2 or 3 hours I average about 30km/hr. For the more serious cyclists this isn’t particularly fast – for a recreational cyclist this is not bad going. With my electric bike, it is possible to not use the motor and just ride it as a regular bicycle. Apart from up steep hills where you notice the weight, it still performs well so it’s no real concern if the battery goes flat out on a ride. I found that riding my electric bike – using the electrical drive only gave almost exactly the same performance as riding it with no power and just me pedalling only. In flat out power, I can do better than the electric – but for sustained power me and the motor are pretty much equal. This was kind of the plan – I didn’t want something super powerful – but I was surprised it turned out so well. Electrically, I tend to ride the bike on full power all the time, unless the conditions hold you back

So, with me pedalling and the bike at full power the total power is about double. Something to remember is that if you double the power you don’t double the speed. Think for example about my bike with about 200 watts will do about 30km/h and Valentino Rossi’s race motorbike has more like 200 thousand watts and does about 320km/h – I know they are not quite the same, but you see the point – Rossi’s bike has a thousand times the power but only goes about 10 times faster – so the relationship of power to speed is not linear, and speed is the cube root of power (cube root of 1000 is 10). Similarly, if you have a bike with 8 times the power it will go 2 times as fast ( the cube root of 8 is 2) and if you have a bike with 2 times the power (like my bike ) it will go about 1.25 times as fast (cube root of 2 is about 1.25 ) So – whereas the bike will do about 30km/h with just the motor and about 30 km/h with just me – together we can go about 38km/h flat out.

The bike and the build

I purchased a Giant Cross City 4 bike. The cross city 4 has Chrome Moly forks and an alloy frame, large 700C wheels and 24 speed Shimano gears. As a road bike this is a really nice smooth bike. It weighs in at 12.1kg which isn’t bad for the price and the intention, By comparison my Giant TCR full carbon road bike weighs 8.8 kg. Having the 700c wheels makes the cross city roll as easily as a road bike so this is a quick comfy bike. The tyres are a bit bigger at 32mm (700C32) where the road bike is a 23 (700C23) but this is probably better when a motor is being fitted.

So, the electric kit. I went for the front wheel type smaller size motor which as I understand it, is similar for the 200w and the 350 watt set-ups, and got the Panasonic 36V, 11.5 amp hour tube type battery that mounts to the front frame down tube where the water bottle holder would normally go. The motor comes as a complete front wheel to which you fit your original front tyre and inner tube. The battery comes with a bracket that mounts to the bike frame using the water bottle holder bolts. The battery then snaps in to this bracket and requires a key to remove it. The battery like this rattles around a bit, but the kit includes some sturdy Velcro straps that fasten around the battery and bike frame and hold it all good and secure and no movement or rattle. Once all was fitted It was back on the scales. The cross city with the full kit fitted weighed 18.3kg, so the kit itself weighs just 6.2 kg which I thought was pretty good.

I fitted a wireless cat eye speedometer, fitted the sensor to the new front wheel, measured the circumference of the wheel (one revolution marked on the floor) as 2156mm and dialled this in to the speedo. With the battery fully charged I was able to lift the bike’s front wheel into the air and drive it with no load. With no load, the motor quickly accelerates in what feels like a series of steps as the thumb throttle is slowly rotated the ninety or so degrees from zero position to full. At 100% throttle the motor was able to drive the wheel to 39.6km/h where it quickly settled and then ran at this constant speed. When the throttle is closed off, the motor quickly comes to a stop but the front wheel continues to rotate freely showing very little friction.

Overall I was really satisfied with how comprehensive and easy to fit the kit was and now many months later it still seems solid and has had no issues or failures even in wet weather. The charger and peripheral gear are still all working great.