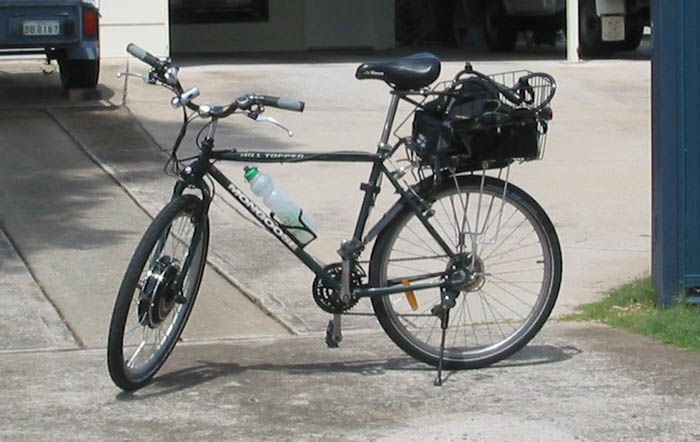 I’ve been a bike rider all my life but have been unable to enjoy it as much as I would have liked due to ill-health. I now live in Brisbane in the Fortitude Valley/New Farm area which is pretty hilly. When I learned of Matt’s Solar Kit I moved heaven and earth to get hold of one and my life changed forever. Hills just disappear when you switch on the motor and as these are the bane of the cyclist’s life this makes all the difference. I now do 90% of the family errands by bike and think nothing of it. I have kept my rear basket and sunk the battery in it, but because the basket is big I still get to use it. I now ride my bike more than ever and once a week attend meetings of a hobby-group at the Queensland Uni which hills would have made burdensome before. I arrive there and get home without a drop of sweat on my brow. I’ve done some more exotic trips too. I took the bike by car to my old home-town in the Darling Downs and spent the day zipping about getting sweet ‘revenge’ on hills that used to vex me as a child. On another occasion I rode from Lismore to Nimbin for the famous Mardi-Grass and back, a journey of some 60ks. Because I was sparing with the battery the bike still had charge when I returned but the journey was just about painless! Matt’s solar kit is the best I have ever heard of and his courtesy and standard of service is second to none. Do yourself a favour and get a solar-bike as soon as you can. Here is a photo of ‘Bilbo Bicycle’ in former days,  but since the kit known as ‘Shadowfax’. This bike has been in constant use for around 2 years now and has travelled thousands of kilometres trouble free.