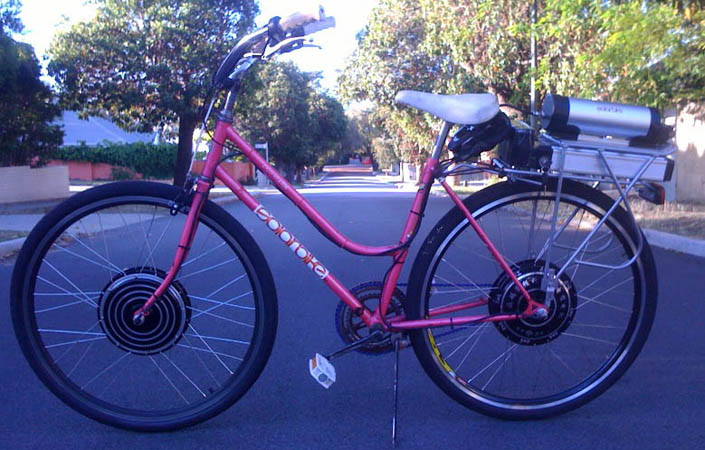 This bike was a wreck from the side of the road that I removed everything from and kept only the frame, forks and seat. It has a front and rear 500W motor, each controlled by a separate battery and control system. Thumb throttles in each hand worked the best for me and I liked the olders style handle-grips. It was awesome but it was definitely too much for this bike. It wobbled a bit and with two batteries and a rear motor on the back wheel the weight balance wan’t ideal. Also, after crashing it the rear rack snapped, possibly due to the extra weight but more likely the driver. Even though the bike wasn’t ideal for this setup it went like bananas upon take off and when pedalling in a straight line it took off more or less as quickly as a normal car. There was heaps and heaps of torque up hills and it was possible to ride up all hills I encountered single speed in the saddle with hardly any effort. I’ve since removed the front wheel and water bottle battery and it is more tame and ridable with only a single powered motor. I’ll retry this system on a more robust mens hybrid bicycle and put the water bottle battery on the diagonal frame to better balance the weight. I’ll also connect both systems through the same throttle to see if it works and is better than two throttles. I’d say that if going for a high power electric bike option then the 750/1000W kit with a single 48V 12Ah battery is better than two individual kits. A very sturdy bike is needed and it might be best on a tough chro-moly frame with torque bars. The power from both wheels is great but it comes at a sacrifice of extra weight and a need to charge two batteries rather than just the one. Also, the 1000W kits have a slightly higher top speed than this dual 500W kitted out rocket ship. The acceleration and torque uphills is fantastic but I found that I’d get to 35-40km/hr nearly instantaneously and then it’d not do much more without pedalling very quickly. It seemed to be too much on the side of electric power than pedal power. One kit is ample but the rev head inside us all has to be sated.