A very good bike to setup an electrical conversion kit on for high speed commuting is the Giant Cross City 3 and Giant Cross City 4. These are flat bar road bikes and retail at most bicycle shops for $799 and $599 respectively. The Giant Cypress (2, 3 & 4) are more of a hybrid style bike suited to the leisurely commuter and are also good bikes to convert but do not accommodate the water bottle style battery option. They are a cheaper option at $579, $479 and $379 respectively. If you are in Perth and want a high performance electric bike then I can highly recommend the Giant Cross City 4 ($599) with the water bottle battery option and any motor power ($950) fully assembled ($120) for a total of $1670.

Tests were performed on two battery systems: a 36V 10Ah lithium ion phosphate battery (6 months old) and a 37V 7Ah lithium manganese phosphate battery (brand new). Measurements were performed using the Cycle Analyst (Grin Technologies). The measuring device was located between the battery and controller. Measurements were performed on a Giant Cross City 3 (700c rim, flat bar road bike) fitted with a “500W” motor. The rider was 35 years old and of average fitness. Riding was performed between North Fremantle lighthouse and Swanborne surf station (equally in both directions), this is mildly hilly terrain and on the day there were 20 knot SW winds blowing. Moderate but comfortable pedalling was performed throughout the tests. The tests began with a fully charged battery and were terminated when power assistance was negligible. The slightly higher Wh/km values when using the 7Ah LMP battery were due to this battery being tested immediately after the 10Ah LFP battery and the poor rider was tiring.

When using a 500W motor, the average Watt and Amp output was approximately 300W and 8.5A over the two tests. The watt output would reach 500W on some reasonable hills whilst pedalling but would decline to about 200W when on flat with some pedalling. When going downhill full throttle the watt output would drop to about 50W. When riding up a very steep hill with no pedalling until the bike came to a grinding dead stop it was possible to overexert the motor to output 710W and 37A, holding it at this point for any duration would surely burn out the motor or other parts of the system. This power was measured between the battery and controller so if measured at the wheel this output would be approximately 20% lower due to inefficiencies of the controller and motor. 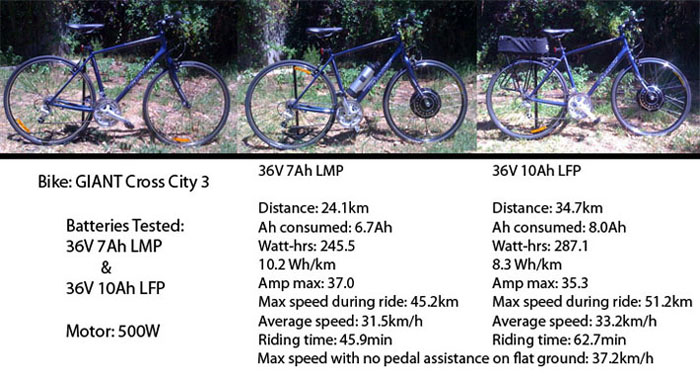